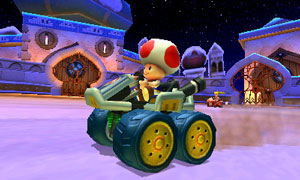 Customise your vehicles with accessories to give you a competitive advantage.

There are a range of game modes to try in solo mode, like Grand Prix and Battle Mode, but you can also play with friends or connect to the web to race up to eight people anywhere in the world. With eight cups in which to compete and 32 courses in total (including 16 you'll see for the first time in Mario Kart 7), there is lots to enjoy. There are even time trials to help you hone your skills – just pick a course, set the best time you can, and race against 'ghost karts' saved from previous record laps. 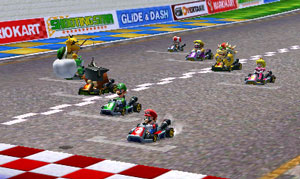 Players can compete in local or online multiplayer matches against their friends. 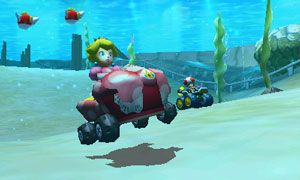 New courses take players on wild rides, including through the sky and underwater.

When it comes to choosing characters to represent you on the road, you'll find all your favourite classic drivers to pick from, and you can also let your very own Mii get behind the wheel! There are new characters to enjoy in Mario Kart 7 too, including Lakitu (the lightweight Koopa who usually counts down the start of the race) and Metal Mario, who is just as heavy as his appearance suggests, though his top speed is still incredibly impressive. Elsewhere, don't be fooled by the elegant Honey Queen, as she can hold her own on the track and won't be nudged off the track so easily!

For those looking to battle others, Balloon Battle is a great way to play. Take on other characters and aim to burst all their balloons using items – the one who breaks the most within the time limit will take the top spot. In Coin Battle, the focus is much more on what you can collect – just choose a stage and grab as many coins as possible to emerge victorious. For multiplayer modes, you'll need to buy or download Mario Kart 7, but only one game card will be required for up to eight Nintendo 3DS users to join in the fun. However, players without a game card will automatically have Shy Guy as their selected character. 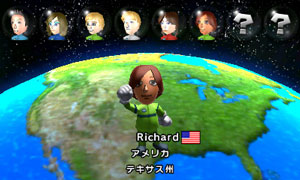 Race as your favourite characters from the Mushroom Kingdom, or as your Mii.

Not only can you race registered friends, but you can also take on previous opponents and others you have met through StreetPass. You can set the rules of play and exchange data with other StreetPass and SpotPass opponents, exchange Mii characters automatically, and save things like player names, ghost data, and other community information.

Key features of the game: