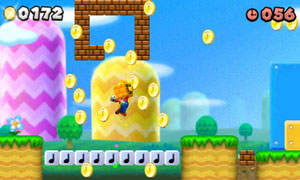 Collect as many coins as possible in Coin Rush Mode – there are one million available! 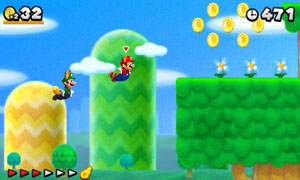 The return of Raccoon Mario gives Mario the ability to fly and access hidden areas. 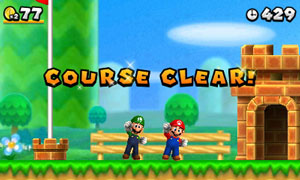 You have the option to play the entire game in two-player multiplayer mode.

As the first of the traditional side-scrolling Mario games to be developed specifically for Nintendo 3DS and 2DS, gamers will find a great mix of the familiar and the not so familiar when they play New Super Mario Bros. 2.

Available now to buy or download, New Super Mario Bros. 2 comes packed with more than 80 brand new courses which are stacked with all sorts of secrets and hidden surprises to discover. At first glance, it's classic Mario platform action, but there are also some major differences to look out for, like the opportunity to collect an incredible one million coins for the first time ever!

But the gold rush doesn't end there, as there are three all-new gold-themed elements that will help you out throughout the game. The first of these is the Gold Flower power-up, which sees Mario become the amazing Gold Mario. Not only does this transformation allow you to shoot Gold Fireballs at enemies and blocks, it will also mean you can turn them into valuable coins. In addition, if you're quick enough, you'll also get the chance to turn 10-Coin Blocks into special Gold Blocks, which can then be worn over Mario's head to collect a steady stream of coins as he runs before the power runs out. The third option for collecting coins will come when you spot a Gold Ring on a course. You'll need to be skillful enough to jump through it, but when you do you'll see all your enemies turn to gold – then all you need to do is collect the additional coins they produce in their own unique way.

Players of New Super Mario Bros. 2 will also be glad to hear that the game has retained some of the more classic elements of the franchise that have made it so popular over the years. This includes the Super Leaf power-up which changes Mario into fan-favorite Raccoon Mario and lets our hero float in mid-air attack, block enemies with a tail swipe, and fly for brief periods of time.

But there are plenty of new challenges and features to enjoy, too. For example, New Super Mario Bros. 2 lets you complete the entire adventure in co-operative mode, so you and a friend can team up to rescue the princess as Mario and Luigi (as long as you each have a Nintendo 3DS system and copy of the game). There are even three special moves to master in co-op mode that will help you as you take on each of the courses together. Coins that are racked up in this mode will count for both of you, so why not see if you can get a friend to help you reach that big one million target?

Other new features include the Coin Rush mode. This challenges you to collect as many coins as possible, but without failing once. This mode will really get your competitive juices flowing, as it selects three random courses for you to attack and only gives you one Mario to do it in. You can then store and share the results with others via StreetPass and pick up scores to try and beat. These collaborative and competitive fixtures of New Super Mario Bros. 2 will keep you coming back for more, even after you've managed to rescue Princess Peach!