The world of Pokémon takes a breathtaking 3D turn in Pokémon X, an exclusive entry in the popular series for Nintendo 3DS and 3DS XL. Your grand adventure will take you on your quest to become the Champion, the strongest Trainer of all. No matter where you go, you'll encounter many different wild Pokémon that you can befriend. You're also sure to meet lots of interesting people, as well as encounter Legendary Pokémon!

Welcome to the Kalos region

Pokémon X challenges players to visit the mysterious Kalos region, a strange land that will allow you to take your very first steps into the next evolution of Pokémon, with the chance to choose between three brand new starter Pokémon! Home to beautiful skies and forests, the Kalos region is full of interesting places to visit and explore. The central city of the Kalos region is Lumiose City, a thriving metropolis filled with customers checking out its variety of shops. Many roads extend from the iconic tower at the city's centre. 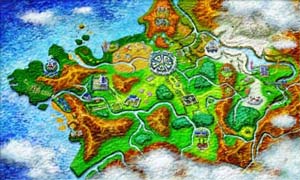 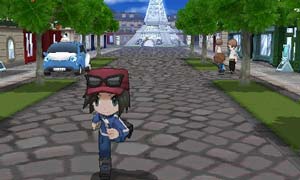 Lumiose City, the centre of the Kalos region. 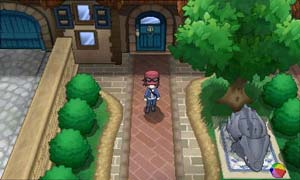 You begin your journey in Vaniville Town.

Vaniville Town is your new home at the beginning of your adventure. The start of your journey waits just past the ornate town gates. Before leaving, your neighbour will be eager to meet you. Plus, you'll meet the family Rhyhorn, who's resting on its pad in your front yard! After leaving Vaniville Town, the first populated location you'll visit is Santalune City. It's a lovely city, easily identifiable by the large fountain at the centre of town. It's also home to the Santalune City Gym.

Your quest to become the Champion

RPG fans will no doubt love the style of play Pokémon X offers, which sees you start off with Grass-type Chespin, Fire-type Fennekin, or Water-type Froakie before really starting your epic adventure. Along the way you'll discover its special moves and pick up experience in each battle; in turn, this means your Pokémon will grow stronger and eventually evolve. As usual though, there are plenty of other Pokémon waiting to be discovered as you go along, including new characters like Grass-type Gogoat, the latest evolution of Eevee named Sylveon, recently discovered Legendary Pokémon Xerneas, and a mysterious Pokémon that's somehow connected to Mewtwo. 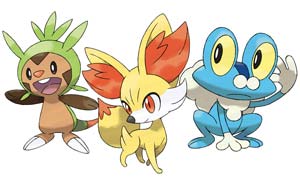 Choose from Chespin, Fennekin, and Froakie. 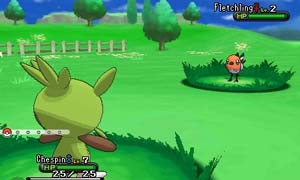 Battle to increase experience and strength. 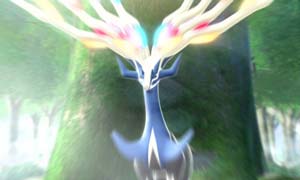 Mega Evolution is described as an Evolution beyond all Evolution, a transformation found only in the Kalos region. It has also been called the greatest mystery of Pokémon. In addition to far greater strength, Mega-Evolved Pokémon may also see their ability change, or even their type. A Mega-Evolved Pokémon will be able to tap into a strength far greater than it could before, so when a Pokémon becomes Mega-Evolved in battle, Trainers will have a great opportunity to turn a battle around and snag a win!

Connect and play with other Trainers at any time with the new Player Search System (PSS), which allows you to find other people playing Pokémon X and Pokémon Y! You'll connect to other players nearby or around the world through the internet; you can even communicate with players you've never had any contact with before. 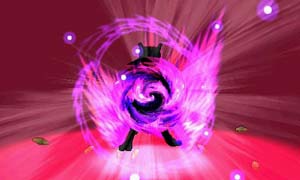 A number of Pokémon can now Mega-Evolve. 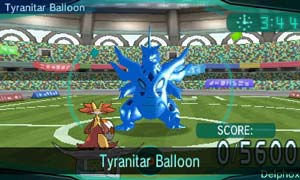 Increase base stats with Super-Training. 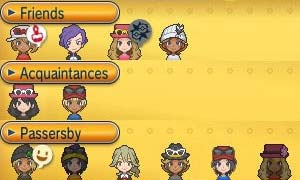 Connect across the world with the PSS.

You'll see all kinds of beautiful scenery and locations during your adventures in Pokémon X. Take beautiful photos of these fantastic views. Just like a real camera, you'll be able to adjust the aperture, shutter speed, brightness, and other features to dial in the perfect shot!

More than ten years after the series' first games, a new chapter in Pokémon battling history is about to unfold with the Fairy type. You've already met the first Fairy-type Pokémon – Sylveon – and there are also Pokémon from previous games that will be reclassified as Fairy-type Pokémon. They may look the same, but the strategies you'll choose and the way you use these Pokémon in battle will be unlike ever before!

Even more new features in Pokémon X include the following: new ways to battle in Horde Encounters and Sky Battles, playing with your Pokémon in Pokémon-Amie, changing your outfit and hairstyle, Trainer PR Videos, the Battle Chateau, the Battle Maison, the Friend Safari, and the Battle Institute. 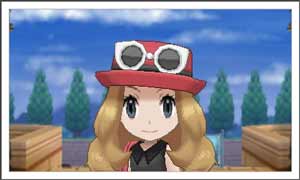 Take great photos how you wish. 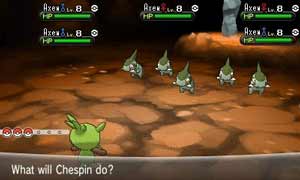 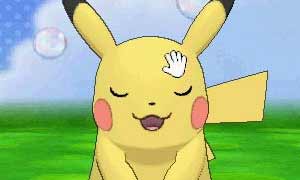 Play with your Pokémon in Pokémon-Amie.